Most of us can’t imagine a kitchen without modern conveniences appliances bring us today. Microwaves allow us to heat food in a matter of minutes quickly, and coffee can be made at the push of a button.

But it wasn’t always this way. The history of modern kitchen appliances shows us how far we’ve come in food storage and preparation and making our kitchen routines as effortless as possible.

But have you ever wondered how these modern appliances came to be, or how people used to survive without them?

People have always needed to preserve their food. For thousands of years, different methods involving salt or smoke have been used to keep perishable food longer.

It’s what allowed people to travel, take to the ocean, and today, fly through space. Refrigerators have come a long way in the last 100 years, allowing us to more effectively preserve our food and establish a new standard of food safety.

Without the modern refrigerator, ice would be a rare commodity requiring you to retrieve large pieces from colder places. Luckily for us, ice and ice cream are available to everyone, regardless of how wealthy you are.

The first modern refrigerator was invented in 1913 by Fred W. Wolf. It relied on vapor compression, a dangerous process that was prone to leaking toxic gases. Finding a safe and accessible way to refrigerate food was becoming a pressing issue at the time, even motivating Einstein to invent his own alternative.

After WWII, the modern refrigerator was mass-produced for the first time. Since then, the design of refrigerators hasn’t changed much. However, with the wide adoption of smart technology, many fridges now come equipped with the ability to track your food and its expiration dates. 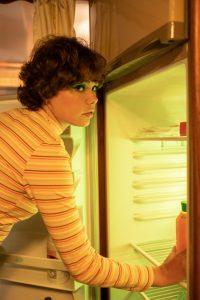 Long before the at-home drip coffee maker was invented, people made their coffee through a process called percolation. The process involves adding ground coffee beans to boiling water, pouring out the contents from a special pot that catches loose grouds.

Since then, there have been numerous coffee making inventions that have greatly expanded the world of coffee drinking. The drip coffee maker, however, is among the most common variations in America.

But before the drip coffee maker was invented, one advancement forever changed the way we make our morning brew— paper filters. Anna Melitta Bentz invented paper filters to brew coffee in 1873 after growing tired of the problems that often came with percolation.

Percolation can sometimes lead to over brewing, creating an unpleasant taste and texture. Bentz discovered the usefulness of filters after using her son’s notebook paper to experiment, paving the way for drip coffee makers.

Mr. Coffee was the first to produce the modern coffee maker, incorporating a heating element, pump, and paper filter in the 1970s. The company is often credited with popularizing coffee throughout the industrialized world and is still one of today’s leading coffee maker brands. 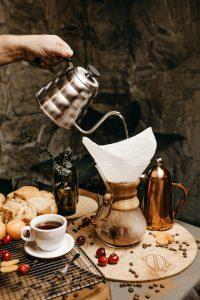 Almost all modern kitchen appliances have histories that go back hundreds or even thousands of years. But the microwave is purely a modern device that wasn’t mass-produced and widely available until the late 1960s.

Microwave ovens work by vibrating water molecules with microwaves produced by magnetron tubes. The technology that makes this possible was first used during WWII for radar detection.

After the end of the war, the company manufacturing magnetrons struggled to find an alternative use for their invention. Still, it would take a lucky accident for its ability to heat food to be discovered. During experiments with the tubes, researchers noticed magnetrons would melt food if they were nearby.

Upon discovering this, the microwave oven was quickly patented with depictions of popping corn on entire cobs. But the first microwaves were still out of reach for everyday people and especially those of modest means.

The first microwaves were marketed towards restaurants and wealthy individuals with prices that would amount to thousands of US dollars today. Sharp became the first company to mass-produce microwave ovens in 1965, finally opening up their benefits to more people and forever changing the way we heat food in a pinch. 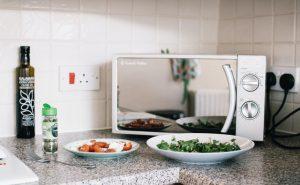 How can we live without the convenience of a dishwasher? It has become a staple in our kitchen clean up routines and can be found in most households today.

The first design for an automatic dishwasher dates back to the mid 19th century. It depicts a wooden device that relies on the manual power of cranking a lever. Although a primitive version of the modern dishwashers of today, it marked the beginning of its inception.

There were many challenges facing inventors who wanted to create the effective automatic dishwashing machine. For its use to be justified, it needed to wash dishes faster than people and not damage anything fragile in the process.

This would not be accomplished until 1893 when Josephine Cochran displayed her washer at the Chicago World Fair. Although her invention wouldn’t meet immediate commercial success, she would later find Kitchen Aid—a giant in the kitchen appliances world.

Dishwashers saw their first success in the 1950s, but it was mainly available to wealthy individuals like most cutting-edge technology. It wouldn’t be until the 70s that dishwashers would be widely available and standard in most households. 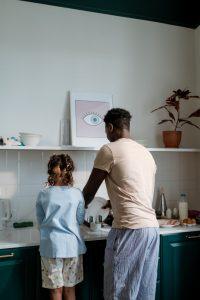 JCS Group Has the Latest on Home Improvement

At JCS Group, we have a passion for everything home improvement. Dumpster rentals are often the first and last step to any big home projects, making us a proud partner to homeowners looking to put a fresh spin on their home.

Follow JCS Group for fresh content, or give us a call if you’re ready to start your home improvement project today.